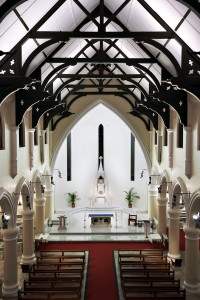 This project was awarded an Award of Commendation at the IESANZ 2009 Queensland Lighting Design Awards.

Mother of Good Counsel is a heritage-listed Catholic Church in Innisfail, Far North Queensland.  Originally completed in 1928 (following the previous church’s destruction in a massive cyclone) the church was again damaged in 2006 by Cyclone Larry, prompting this refurbishment.

The Nave is lit by sixteen lighting brackets each with three Lumascape ‘Omnio’ 70W CDM-R spotlights, arranged somewhat like a candelabra.  On alternating brackets, one uplight is substituted with an MR16 spotlight – Lumascape ‘Omnio Mini’ – which provides supplementary light to the pews for reading.  The side aisles of the church are indirectly lit by MR16 spotlights, discreetly located and aimed onto devotional items.

The Sanctuary is lit by concealed fluorescent battens which evenly wash bright, cool light across the ‘heavens’.  Due to difficulty of maintenance access, extra-long-life fluorescent lamps and ballasts were specified, with ‘planned failure’ for 60,000 hours of maintenance-free service.

The lighting effect sits well with the Catholic Liturgy:  A distinct heirarchy is effected from the Sanctuary to the Nave, Aisles, and exterior.  Devotional elements such as the Tabernacle, Cross, Stations, and Shrine are accented above the general illumination – generally also in warmer tones.

The lighting effect in the Nave may be described as ‘festive’ while the Sanctuary is more ‘austere’.  The mix of indirect light with some direct accents provides an overal ‘soft’ but not ‘flat’ effect.

An unusual effect is produced by the intense uplight on the base of each pier, producing a reflected image in the glossy paint of the side walls – the result being that the piers appear to ‘glow’.

Vision is well provided for, with moderate general illumination levels suitable to users including the aged.  The extensive use of reflected light, and the illumination of vertical surfaces, also provides excellent lighting conditions for photography. 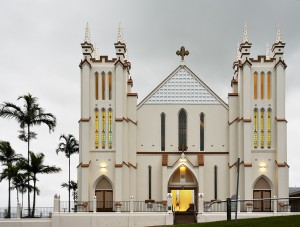 Simple backlighting in the towers, and the brightness of the sanctuary, create an invitation inwards. 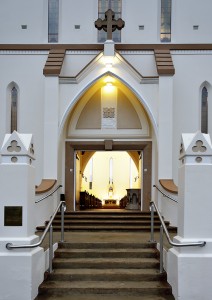 Warm tones are used as an inviting element.

Spotlight brackets uplight the ceiling of the nave, while the sanctuary lighting is completely concealed. 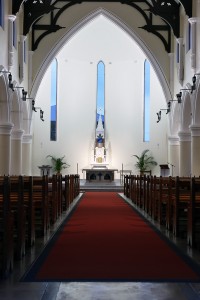 The liturgical heirarchy from sacristy to altar to nave is reinforced by the lighting scheme. 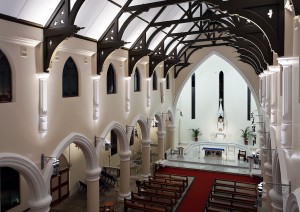 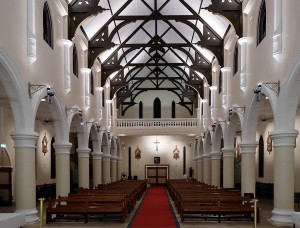 Narrow-beam uplighting of the piers and ceiling lends a festive feel to the nave. 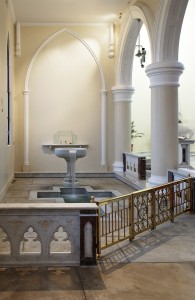 The baptismal font receives ample window light in the day, and is accented for drama at night. 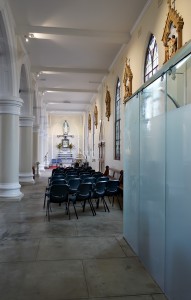 Along the aisles, stations and the shrine are accented by discreetly-placed miniature spotlights. 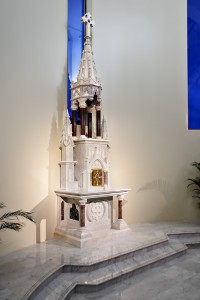 Spotlighting on the marble sacristy spire highlights the tabernacle within.

The lighting design was computer modelled to ensure effectiveness. 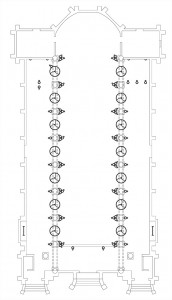 In plan, the simplicity of the lighting scheme becomes clear.